4 Things Every Recruiter Needs to Know About Facebook's Latest Scandal 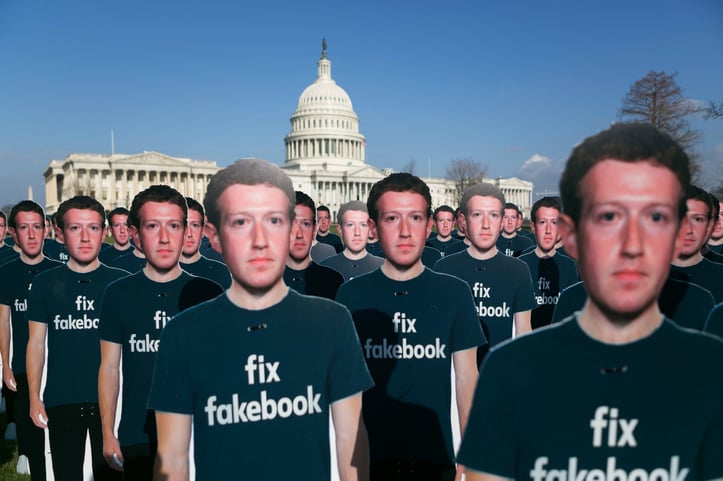 (Photo from Lawrence Jackson at The New York Times)

We've been seeing Mark Zuckerberg's face during his Congressional testimony everywhere... on the tv, on the internet, even in the newspaper! He's been analyzed, criticized, and even made into memes. But what does it all mean? Why exactly was he testifying in front of Congress anyway? And how is this scandal going to affect how recruiters and HR professionals use Facebook?
Don't worry - we'll break down the four most important facts you need to know about what happened and how it's going to effect your recruiting efforts on Facebook.

1. What is Cambridge Analytica and what did they do?

Cambridge Analytica is a consulting firm for political campaigns. In 2016, they were hired by Donald Trump's presidential campaign. They had a researcher at the University of Cambridge create a Facebook quiz called "thisisyourdigitallife"; Facebook users took the quiz and then the app mined data from the quiz answers and the profiles of the respondents; however, it also mined data from their friends without permission. Then, despite the fact that Facebook prohibits selling this kind of data, Cambridge Analytica sold the data to the Trump campaign. This is why Mark Zuckerberg was asked to testify in front of Congress and to explain how this breach could have happened.

So far, everything is indicating that it will. Facebook's stock, which had plummeted when news the scandal broke, actually jumped during Zuckerberg's testimony. Facebook has also announced that they will be continuing to improve their privacy policies following this breach. As of today, Facebook is still the most popular social network by a long shot with over 2 billion active users. So the likelihood of it collapsing or experiencing a dramatic loss are low.

3. How are Facebook's privacy changes going to affect advertisers and marketers?

You may have heard that Facebook is going to be closing their "Partner Categories" function. This may not be a feature you have ever used as a marketer, even if you have run many Facebook ads. Facebook offers its own targeting features that you are probably familiar with - you can target users within a certain geographical area, by their age and interests. Some companies, however, choose to purchase even more targeting data from third-party "Partner" companies like Experian and Axicom. These companies provide information about individuals' off-line purchases and advertising companies can purchase these additional data sets from the Partner companies to better target their ideal customers.

So, this means that if you haven't been using data from Partner Companies like Experian and Axicom, this change probably won't affect your marketing very much.

4. Is Facebook still a valuable advertising option for recruiters?

Absolutely. As we said, over 2 billion people across the world use Facebook. It is the single most popular social network in the United States, and the one which spans the most demographics, meaning you can reach plenty of younger and older users. While this change may be significant to large corporations who purchase this third party data, it is unlikely to affect the marketing of smaller organizations. "The reality is that Facebook’s targeting tools are so powerful," says Henry Franco, HubSpot's Social Campaign Strategy Associate, "some analysts think this change won’t make much of a difference in overall targeting capabilities." We agree!

At Harger Howe Advertising, we are experts in running social pages and the ads that bring top candidates to you through inbound marketing. Do you need help with your social media recruitment efforts this season? Get in touch! We'd love to tell you how we can help improve your recruitment strategy.